Many of you may have memories of homemade rugelach, that cookie with cream cheese dough wrapped around an oh-so-sweet center of fruit jams, poppy seed dough, or nuts. . The origins of pastry go back generations, mostly to European cousins ​​such as the Hungarian kifle, Austrian kipfel, and Polish rogal.

But, hidden away in a locally written cookbook, we discovered a new version of rugelach, one from the pastry chef of the legendary Tony’s restaurant in St. Louis.

For more than 30 years, Helen Fletcher has been a professional baker and pastry chef. His new book, Craving Cookies: The Ultimate American Cookie Book may not be where you think you’ll find a recipe for the famous Jewish dessert.

“The book originally included European cookies as well as American cookies. However, due to its size, this book contains only US cookies,” Fletcher said. “But, because of my love for Rugelach, I decided to make it a bar for ‘Craving Cookies’ while keeping the original version for the European cookie book. 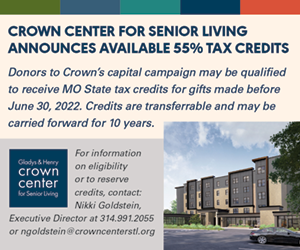 A Rugelach bar, instead of a cookie? According to Fletcher, it’s not a big jump and maybe even easier for many to do, because since it’s a bar there’s no rolling like in the original version.

“I turned it into a very modern bar that was much easier and quicker to make,” Fletcher said.

The origins of this rugelach recipe

Fletcher’s parents were from the former Yugoslavia and his mother made kifle, which is a close cousin of rugelach. The dough for both was originally a yeast dough, but at some point cream cheese or sour cream replaced the yeast version, making rugelach easier and faster. Both are exceptional pastries, according to Fletcher.

“When the Jews migrated to different countries, they took their cooking and their pastries with them, which is why you can find this pastry in all parts of the world, including America,” Fletcher said. “Heavy with nuts and jam, but not particularly sugar, this pastry can be eaten at any time of the day and be part of celebrations. I think if there’s one pastry that’s known as Jewish to pastry lovers everywhere, it’s rugelach, whether people who eat it know it’s a quintessential Jewish pastry or not.

The batter used for Rugelach Bars is easy to make and just as easy to spread without the need to chill the batter first if made in a food processor. Two pieces of dough sandwiched with a filling of jam, nuts, cinnamon and sugar. Any jam or any nut can be used. If the jam or preserves contain pieces of fruit, they should be processed or blended to make them smooth.

“Always looking for a new flavor, I recently discovered this Red Plum jam. It worked well with nuts. However, as I said before, any flavor jam and any nut can be used for the filling,” Fletcher said. 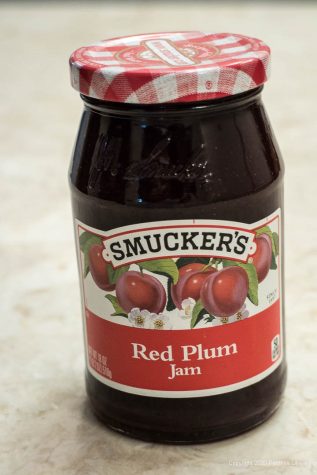 “I hand cut my walnuts into medium chunks. They shouldn’t be too nice,” Fletcher said. 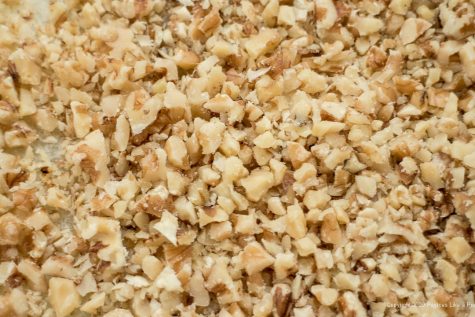 Cutting the top of the dough before baking makes it easier to cut after baking.

Put the flour and salt in the bowl of a food processor. Pulse several times to mix.

Cut the butter and cream cheese into small pieces and place them on the flour.

Pulse until the dough looks crumbly but sticks together when pressed. It should not form a ball.

For this method, arrange the butter and the barely softened cream cheese. Place them, along with the sour cream, in the bowl of a mixer and beat until fully combined. Whisk together flour and salt. Add to creamed mixture and beat over low heat until crumbly.

Connect with your community every morning.

Preheat the oven to 375°F. Spray a 9×13-inch pan or quarter pan with nonstick spray and set aside.

* Anything you want can be used. If using canned, puree them first in a processor or blender.

Toast the walnuts (or any other nuts used) for 7-10 minutes depending on the size of the nuts. Cool completely. Roughly chop them.

Pour the dough onto the work surface.

If it’s too soft to roll easily, refrigerate it to firm it up. Divide the dough in half approximately 410 grams or 14 ⅓ ounces. Roll one piece into a 9 ½ x 13 inch rectangle. Roll the second piece into a 9 x 12 ½ inch piece. Refrigerate this piece.

Place the largest piece of dough in the bottom of the sprayed pan. Press the edges about ¼ inch down the sides of the pan.

Bake for 25 minutes until lightly browned and cooked through. It may look cracked but that’s fine. Cool the crust.

Spread the jam over the crust.

Garnish with the toasted nuts.

Place the chilled piece of dough on top. Let it heat up slightly. Gently press the nuts down and make sure it sticks to the sides of the pan.

Cut the top piece of dough only 6 or 7 wide and 4 down or whatever size you want.

Bake for 35-40 minutes until golden brown. Leave to cool for about 10 minutes then go around the edges with a metal spatula to loosen them. Cut the bars following the marks on the top. Clean the knife between cuts. Cool completely.

Storage room: Store at room temperature for up to one week in a covered box.

You can also find more on Helen’s blog, Pastries Like a Pro.