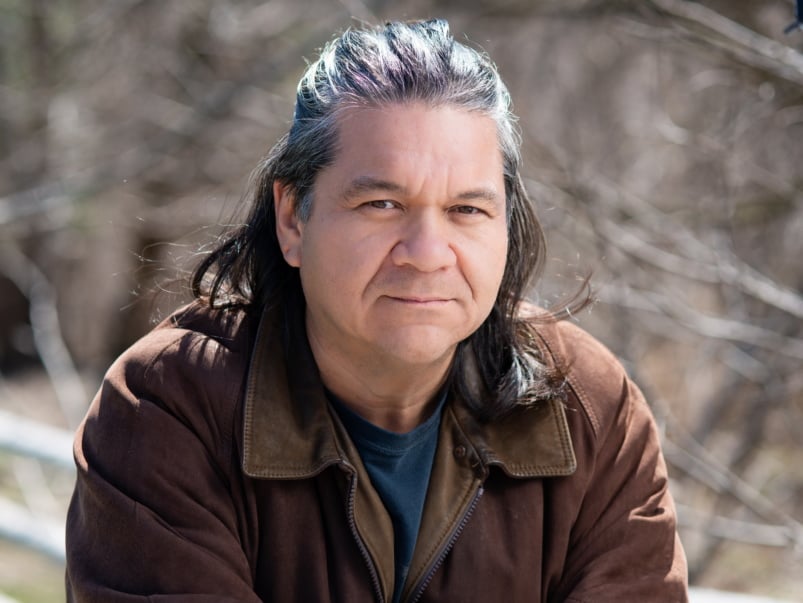 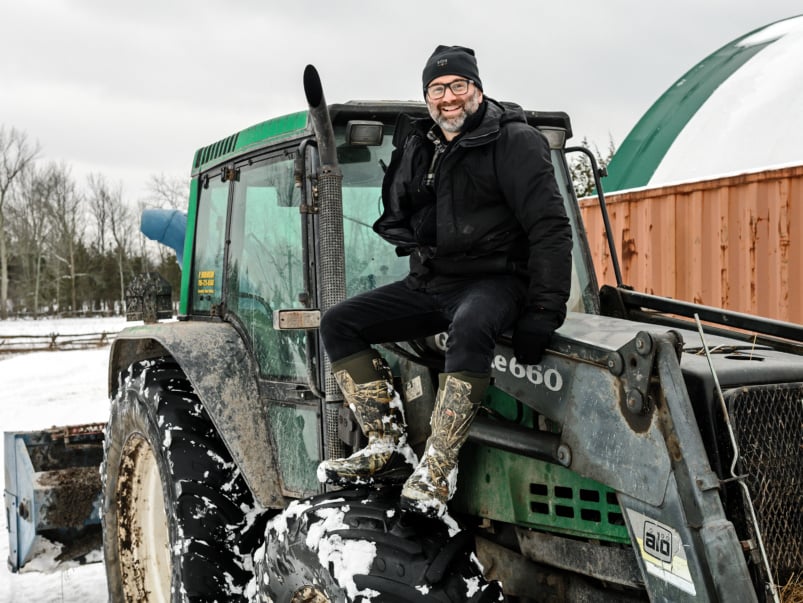 For five years, Emily Watson worked her way through the baking departments of Toronto kitchens, accumulating different skills along the way. When the pandemic hit, the candy store she worked at closed, accelerating her plan to become her own boss. She has since moved to Simcoe County where she opened Kindred Chocolatesa chocolate and pastry shop on an old family farm, and she’s not looking back.

—As said to Jacob Rutka

“I grew up in a family of bakers, and I spent a lot of time in the kitchen with my mother and my grandmother. In our small town of Washago, about 90 minutes north of Toronto, my grandmother was famous for her butter pies, as well as the different types of cookies she baked around Christmas. And my mom used to make amazing birthday cakes – trains, teddy bears, clowns – for me and my brother every year until we were too old for them. Since then, food has been at the center of my daily life.

“I’ve also always been into the arts, so when I graduated from high school, I decided to study food photography at OCAD. It was a great way to pursue two of my passions at the same time. I had noticed that no one in my classes had any professional cooking experience and this inspired me to enroll in George Brown’s culinary program for night school. I thought this would make me an asset to potential employers.

“After school, I did a few unpaid internships: one as a food photographer and the other helping with portraits. I wanted to get my name out there, but I wasn’t inspired by the work. I also had to figure out how to make rent, so I applied to a few different kitchens.

“I started working at Barque Smokehouse in 2015, the same year I graduated. It was the perfect entry into the food industry, as it was very laid back and my job was to make pies, cakes and squares – the kind of stuff I had known about since childhood. It wasn’t long before I realized working in a kitchen wasn’t just a viable career path, it was actually something I loved. The fast paced environment, constant menu changes and teams that felt like family was so much fun. I knew then that I would never leave the industry.

“I wanted to keep learning, so I joined Colette, an upscale French restaurant that was part of the Chase Hospitality Group. It was my first experience making croissants and desserts, and I really enjoyed it. When Colette closed in 2018, I still wanted to work in pastry, but there were no opportunities within the Chase catering group, so I moved to Sud Forno. I worked at their Temperance Street establishment for six months and learned a lot about Italian baking.

“Then I applied for a job at CXBO in Kensington Market and got it. They were known for making these really beautiful sweets with artistic packaging. That’s when I knew I had found the combination of art and food I was looking for.I gained so much experience in my two years there.

“CXBO closed in early 2020. This was the second time in my short career that the place where I worked had closed, and it was a particularly bad experience. My colleagues and I were not notified by head office – we were just browsing Facebook and came across a post that said the company was filing for bankruptcy. I tried to see the end times at CXBO as another opportunity.

“Since I started working in restaurants, I knew I wanted to open my own restaurant. I thought it was doable and I could pull it off. In 2016, when I was 24, I set myself the goal of having my own business by the age of 30 – it’s really the only goal I’ve ever really achieved. Around 2019, the idea for what would become Kindred Chocolates began to form. When CXBO shut down and the pandemic hit, that was the straw that broke the camel’s back.

“I knew it would be difficult to open a business in Toronto without investors. In 2006 my parents purchased a 50 acre farm property in Washago with an old farmhouse that was built by my great-great-uncle in 1900. It was around the corner from my childhood home and the kitten corner of the my grandmother’s farm. My mother and father planned to retire there. Those plans changed, but they figured they would still turn the house into a workshop for my dad, who is a carpenter.

“I knew the house was right there, so I sat my parents down and showed them my business plan. My proposal: to open my own chocolate and pastry shop in the old farmhouse. had learned that apart from a basic kitchen, it didn’t take much to make beautiful chocolates on a small scale – just a compressor, air gun, chocolate molds and a trash bag that could be used like a tent to protect the room and walls from splashes. I had also realized that something like Kindred would be fairly new to Simcoe County, and hoped it would be fairly easy to spread the word using the media To my delight, my parents said yes. It also didn’t hurt that this plan meant I had to move, which they were thrilled about.

“On March 16, 2020, I left Toronto and immediately started working on the farm with my father. We renovated everything together, while trying to keep as much of the original cachet as possible, preserving all the original moldings, hardwood floors, brick fireplace, doors and hardwood railing. I even framed a newspaper from the 1960s that was found stuck in a wall.

“We were an unlikely pair, but he was patient with me and it was a very special experience that I will always be grateful for. I had held many flashlights for him in my life, helped rake leaves, piled firewood, did many school projects with it, but nothing on this scale of construction. The house had good bones, even though it was built over 120 years ago. We insulated the walls, installed new drywall, painted, changed the plumbing and built a brand new kitchen.I had contacted the health inspector before construction started so I knew exactly what was expected.

“While the space gathered, I set aside time to test recipes and figure out what else I wanted to put on my menu. I baked cookies, brownies and started perfecting croissants. The business was finally ready to open last June. It really felt like a family project, which is how I landed on Kindred Chocolates – riffing on the word ‘kin’ and heeding my fellow chocolate lovers, or soul mates.

“It’s been an amazing experience so far. I knew that as a small business owner, I was going to have to wear every hat for a while. My training in food photography has come in really handy This is a very important aspect for marketing that I would have had to outsource if I didn’t already have the experience.

“The reception was also excellent. There’s nothing like Kindred in Washago, a quaint little town with a ton of space to wander around and an awesome antique market. And I think it adds value to the product that these chocolates and pastries are made on a renovated farm, and the packaging for them includes scans of the 16 – yes, 16 – different wallpaper patterns that we found in the farm. I tried to make everything as unique as possible. I have an online business so customers can pick up their orders at the farm and I also have booths at farmers markets in Gravenhurst, Washago and Orillia. The croissants were the surprise hit in the markets – I developed all sorts of arm muscles from all the rolling I had to do with my rolling pin. I’m going to have to buy a laminator if this rhythm continues!

“Right now, I’m in a good position because I have control over all aspects of my business. But I also have to think about the direction in which I want to take it. I have a dream of making the farm a bit of a destination, where people can come and get chocolates and pastries, but also fresh produce or even ice cream.

“Leaving Toronto was difficult. It was my home for a decade and it’s where I still have a ton of friends. But last year really confirmed that I made the right choice and I’m so lucky to pursue my passion. 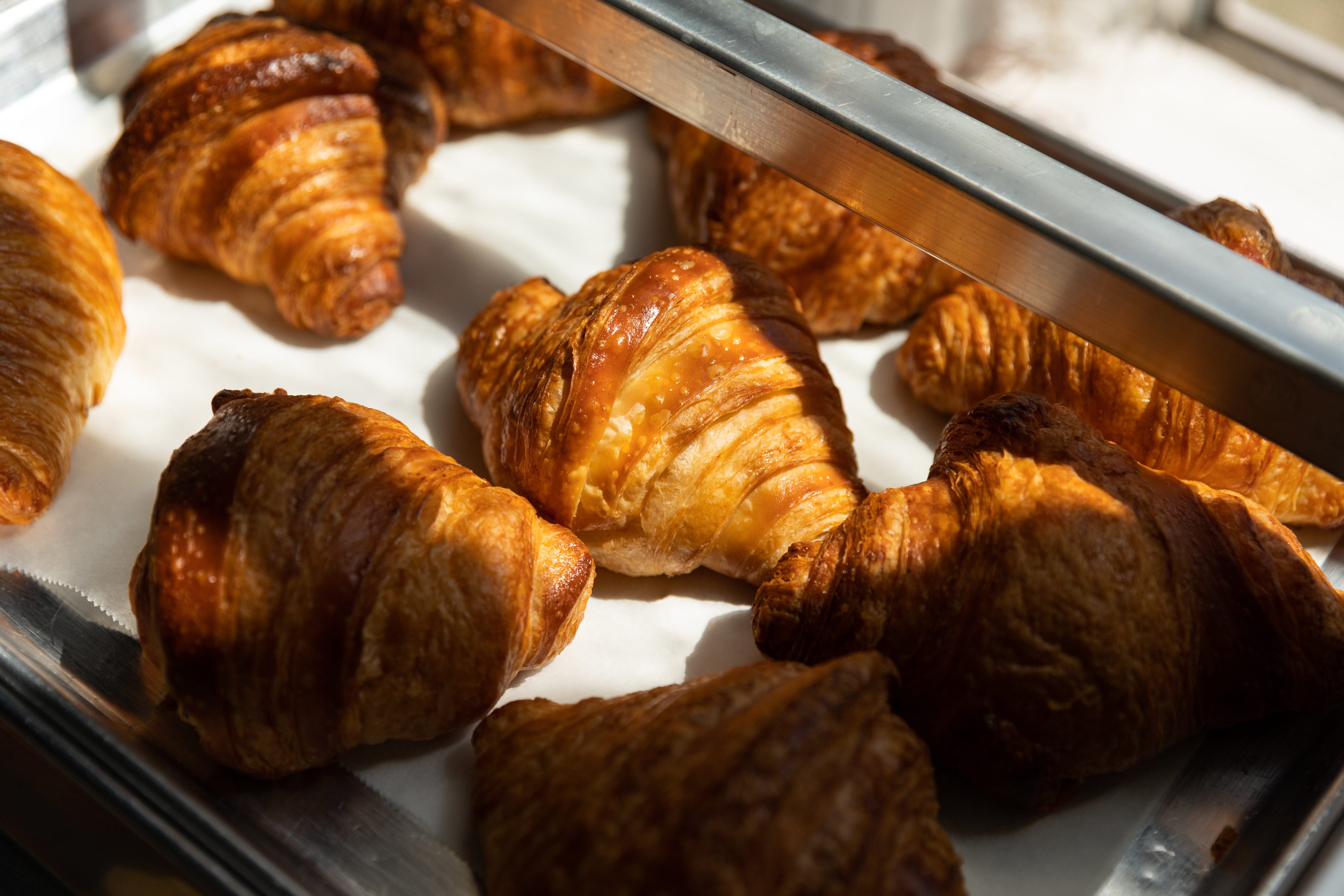 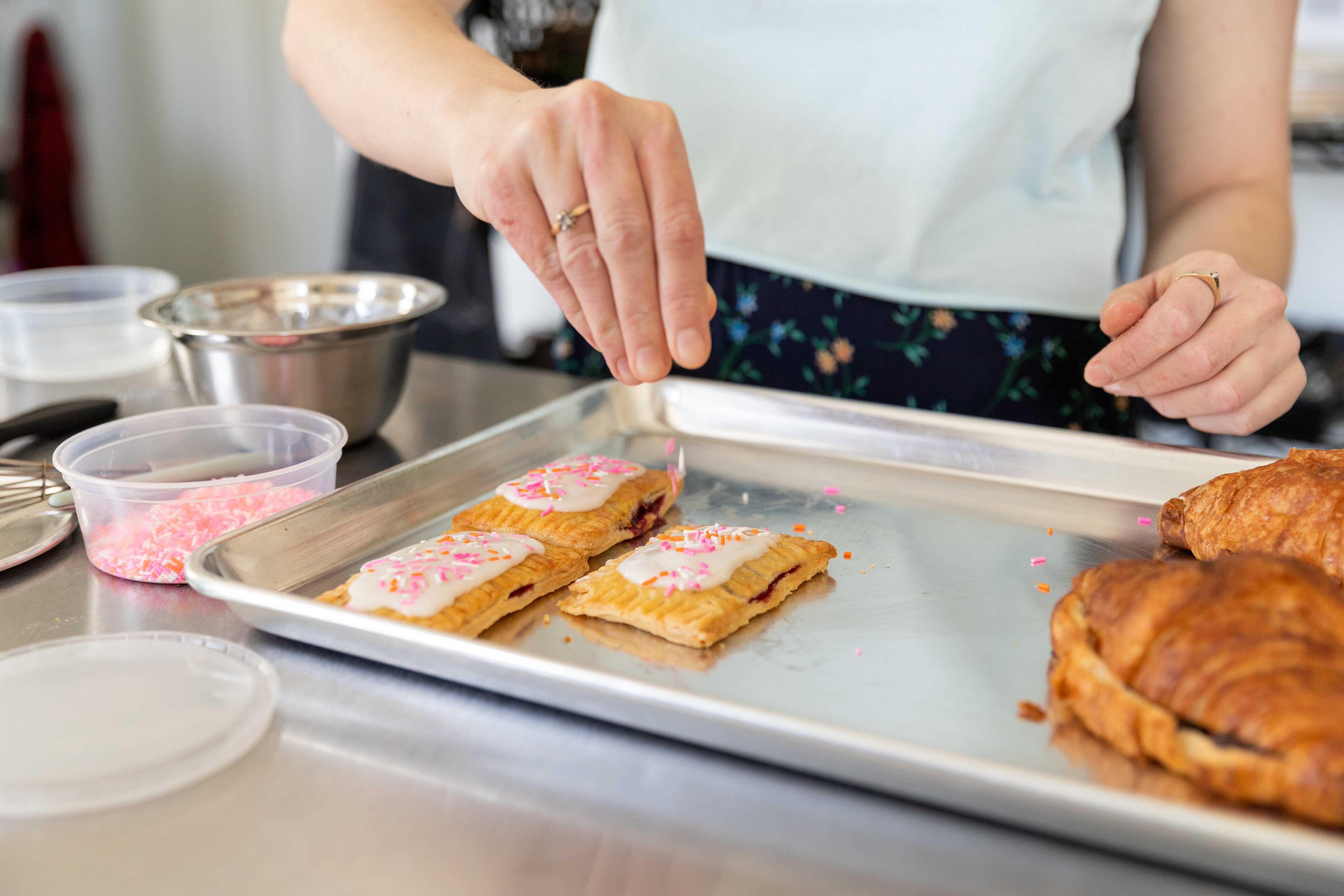 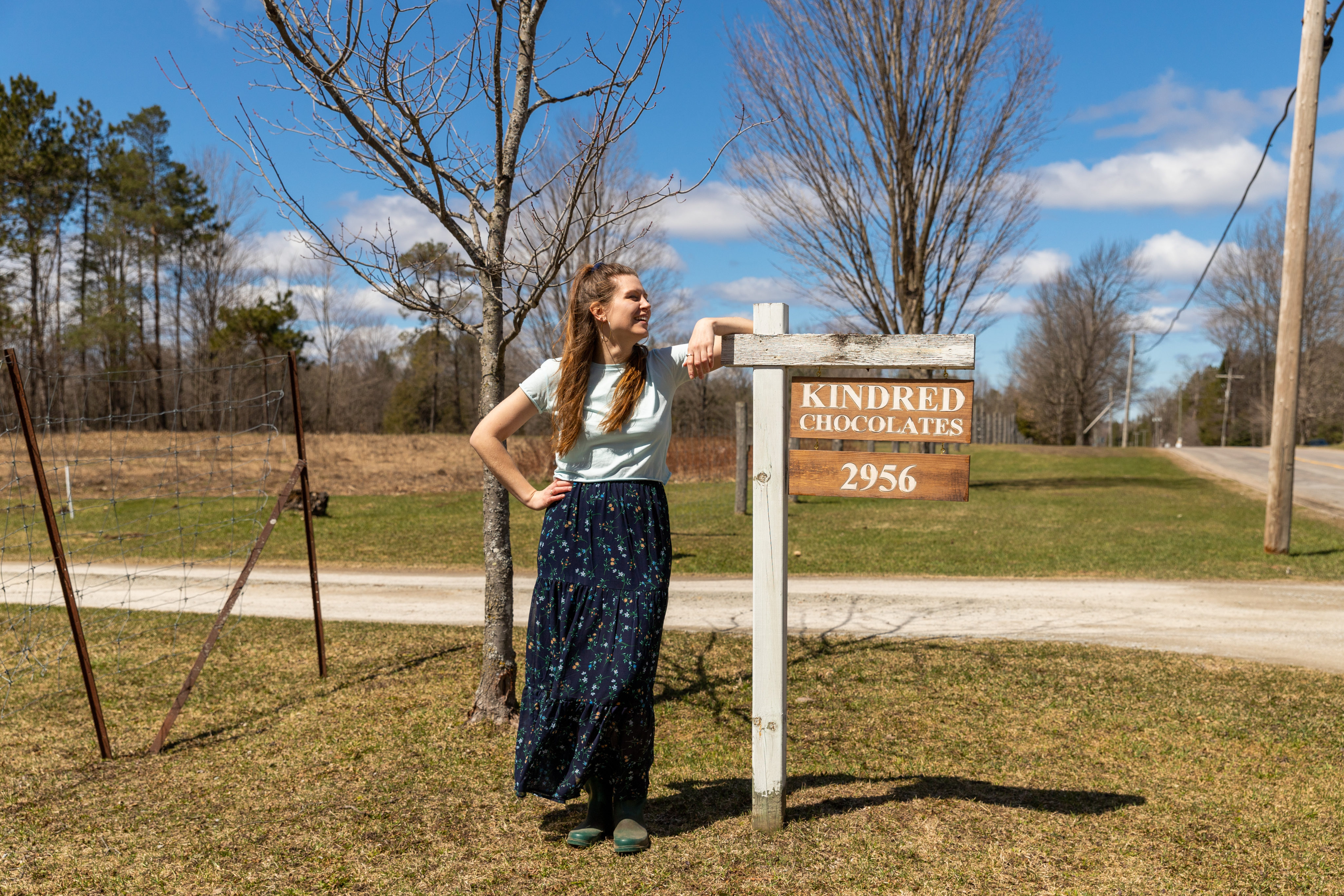