Outer Southeast Portland has a new Iraqi bakery. Sunbela 2 (pronounced soon-bulalisten)) moved from its original location in Beaverton to a small shopping center in the Mill Park neighborhood.

Through an interpreter, the owner of Sunbela 2, Faten Abojazzara, told the Mercury that the move was spurred by a loss of sales, during the pandemic. But since moving, the humble shop has become something of a hub for East Portland’s Iraqi community.

On one visit, Abojazzara greeted her regular customers like long-lost family – with bright eyes and reciprocated hugs. An Arabic music video buzzed in the background, from a television screen, adding to the ambience.

Abojazzara said cooking Iraqi food keeps her in touch with her country. It serves as a reminder of family gatherings and good times, warding off feelings of homesickness. She said she wanted to share this with her compatriots and other Portland Arabs, making them feel at home in their new home.

In Iraq, Abojazzara ran a pharmacy, but in 2016, when she moved to the United States, she started from scratch, due to a lack of English proficiency.

She founded the Beaverton Sunbela in January 2021, cooking all the food while her partner Firas Kaittan took care of the cooking. After opening Sunbela 2 on the SE Division last January, the pair closed the original location to keep up with traffic at the new location.

The main counter of Sunbela 2 is full of desserts: baklava of various shapes, semolina cake soaked in syrup called basbousa, biscuits stuffed with pistachio or dates and petit fours. Iraqis are fond of sweets, says Sunbela’s manager. In addition to being served as a dessert, these pastries can also be enjoyed with coffee or tea after lunch or midday with friends or family. 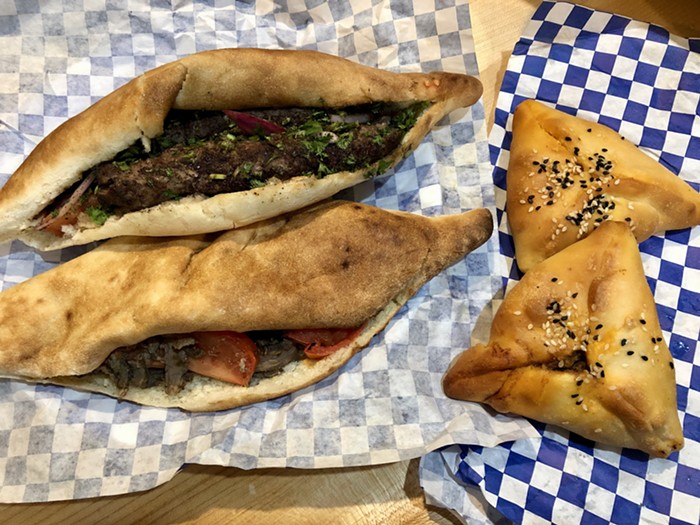 The bakery’s menu reflects Baghdad cuisine: skewers, shawarma, falafel sandwiches and rice plates with chicken or a large shank of lamb. The beef kebob sandwich I tried was tender and flavorful, generously seasoned with sumac.

Aside from the digital screens hanging above the counter, there’s not much signage detailing the bakery’s other offerings, so if you’re curious about something, ask! In a display case to the side of the shop, you’ll find cold salads and dips like baba ganoush, dolmas and tabbouleh. Oh, and don’t miss the boxes of meat and spinach pies, some flat like mini pizzas and some folded into triangular pockets.

But Sunbela’s cornerstone is their “stone bread,” or samoon. Traditionally baked in a stone oven, the diamond-shaped samoon is one of the most popular breads (and street foods) in Iraq.

Sunbela shapes and cooks her samoon by hand daily. It’s sold as is, ready to take home and eat with your choice of filling, or you can order it as a sandwich.

Samoon has drawn comparisons to Italian ciabatta for taste and texture, but I would describe it as a chewier, denser pita. It is soft and chewy with a nice chew. If you’re buying some to take home but feel too lazy to make a filling, it’s perfect with za’atar (stir in olive oil and dip into the mixture) or dukkah (dip first in olive oil, then dip in dukkah). These spice blends can be found at Middle Eastern/International grocery stores like Mingala, located just opposite Sunbela. I also like Cedar Halal Market in Beaverton and World Foods in Pearl.

As business expands in the new location, Abojazzara says she wants to expand vegetarian options, including soups. The bakery currently does not have an indoor dining area, but come summer they hope to add outdoor seating on the back patio.