Most Jewish holidays are known for their symbolic foods and rituals, and Hanukkah – which began on November 28 and ends on December 6 – is no different.

Hanukkah commemorates the victory of the Jewish Maccabees against King Antiochus, who attempted to ban the Jewish practice in the 2nd century BC.

Legend has it that when the Maccabees took over the temple in Jerusalem, a single jar of oil – which should not have lasted more than a day – illuminated the menorah for eight days.

One of the peculiarities of the celebration of Jewish holidays in Australia is that we are seasonally out of step with most of the world’s Jews, who live in the northern hemisphere – the “festival of lights” makes a lot of sense if the we consider the fact that it falls close to the winter solstice.

But the start of summer is a great time to throw a party.

And unlike other Jewish holidays, Hanukkah is pretty cool.

Once the menorah is lit, the rest of the festivities are all up to you.

Her family still hosts a big barbecue where latkes are served and her grandmother distributes Hanukkah gelts (coins of chocolate and money) to the children.

â€œThe atmosphere is hectic and quite fun, as it coincides with the end of the school year,â€ she says.

Over 2,000 years after the events that inspired Chanukah, we still celebrate by lighting the menorah for eight nights and eating delicious fried foods, because of the oil.

Here are some suggestions and tips.

Latkes: they should be thin, crispy and fresh

Ellie Bouhadana, a Melbourne chef of Moroccan-Israeli origin, fondly remembers her grandmother’s latkes, which were made with onion and schmaltz (chicken fat).

She says anyone can make latkes. â€œThe ingredients – potato, flour, eggs, onion, oil – are all cheap and readily available.

Just search for recipes online and invite a few friends over for a party. “

This is where I have to confess something bordering on profanity: I’m not the biggest latke fan, even though people love them so much that they’ve reached the top of the talk on Twitter.

I often find them bland or too oily.

Maaryasha says the key to a good latke experience is keeping them small and eating them fresh.

She says her grandmother’s are the best (a common theme when it comes to Jewish food).

â€œAfter grating the potatoes into thin strips, she removes any moisture and fries them very dark.

“They’re super salty and super crispy, with chunks of potatoes sticking out. I remember eating them when they came out of the fryer.”

Popular toppings include sour cream, applesauce, smoked salmon, and caviar if you feel like it.

My favorite Australian twist: a mashed avocado with a little feta and lemon juice.

Be part of the ABC Everyday community by joining our Facebook group. From lighting candles to consuming jelly donuts: this is how the eight-day celebration of the Festival of Lights unfolds.

Filled donuts (called ponchkes in Yiddish and sufganiyot in Hebrew) are another beloved Hanukkah treat.

The flavors and decorations can get quite elaborate and kitschy at some bakeries in Israel and the United States, but the classic version – filled with jam and dusted with icing sugar – is my favorite.

â€œI’m going to make a vanilla cream, a jam, a halva and some kind of chocolate praline,â€ Maaryasha says.

Growing up, her family bought them from a local kosher bakery, as homemade donuts can get quite laborious.

Ellie plans to make sfenj, a North African donut (sprinkled with sugar or dipped in honey) eaten by Moroccan Jews on Hanukkah.

She remembers seeing her grandfather make them at his home in Haifa: “They are pretty puffy rings, a little sweeter than traditional donuts.”

Because the Jewish diaspora spans the globe – and most countries and cultures revere some form of fried dough – there is a range of fried candy associated with Chanukah, bumuelos in Sephardic and Latin American communities. at gulab jamun in the Bene Israel Indian community.

In short: if it’s sweet, fried, and kosher, it can be a Hanukkah treat. 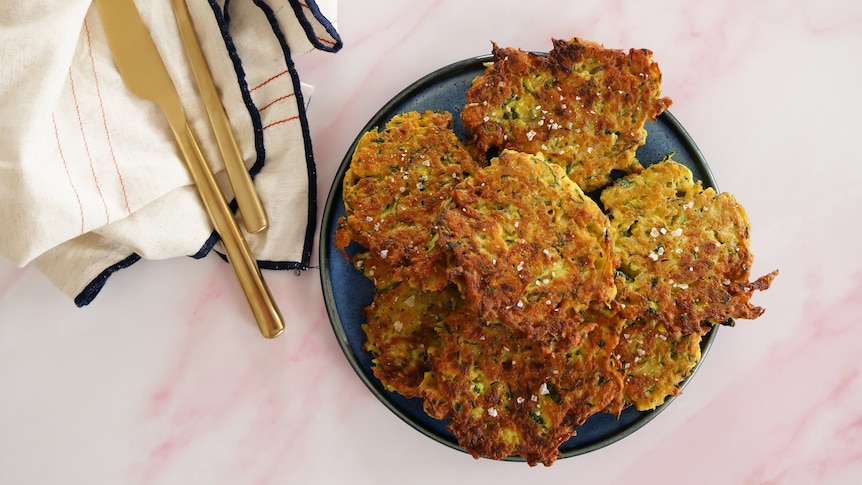 Gluten-free, dairy-free and egg-free, these zucchini fritters are a gift for almost anyone who loves donuts.

Embrace the summer vibes and have fun

In the past, I have done Chanukah at communal parties at a local park, at the beach with my family, and while camping with friends. (Electric menorahs are the way to go if there is a total fire ban.)

What I relish most this year – after Melbourne’s many long lockdowns – is how easy it is to visit family and friends to light candles.

It will be great to walk around my suburb after sunset, no curfew, seeing menorahs at the windows.

“Hanukkah is not so under pressure [compared to other Jewish holidays], people don’t think too much about it, â€says Ellie.

She usually does this the first night with her immediate family gathered around the dining room table, just like she did when she was a child.

And when her schedule allows it, she hosts a garden party with friends, serving up snacks like latkes, sfenj or fazuelos (another fried Sephardic pastry).

“I still feel quite moved when I hear my father sing the [traditional blessings and] Songs; it really evokes an emotional connection to the holidays. It’s like how you remember the order of songs on one of your favorite albums. “

Daily ABC in your inbox

Receive our newsletter for the best of ABC Everyday every week